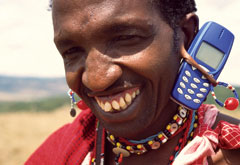 Melvin Kranzberg (1917-1995) was a really smart guy. He earned his PhD from Harvard and was a professor at Georgia Tech. He also served in George Patton's army during World War II, so he had to be tough too. I respect smart, tough people so I pay attention to their ideas. He studied how technology and culture shape each other, which led him to some impressive insights.

Kranzberg is best known for his six Laws of Technology which state:

At the heart of Kranzberg's laws is the simple understanding that humans are tool making animals. It understands that there is a coevolution between human kind and the tools we build.

In any conversation about the development of a new technology, keep a copy of these rules nearby. Whenever I meet with entrepreneurs who want to enlist me in their new tech business venture, I always pull up a copy of Kranzberg's Laws. It helps me to frame the potential of the invention, and to look for the unintended consequences. I try to see beyond the immediate profit potential of the idea, and look to how culture and technology will interact to propel, or hinder, the business idea. It is surprisingly useful.