I'm certain my long silence on this blog has left many of you in terrible grief. Let's just say it has been a year of spectacular challenges that have left me with no time for anything but the necessities. I'm not alone in saying that I will be happy to see the end of 2016. Also, I want to start writing again, but no promises about publishing schedules. Onward...

Now that that is out of the way, allow me to vent a recurring frustration...the need for regular, planned IT upgrades. Otherwise known as "I Can Squeeze Another Year Out of These Old Computers." Allow me to cut to the chase: it's stupid thinking. 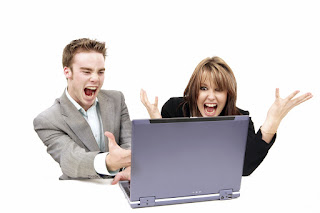 I get that the economy has been tough for many small businesses. I understand that cash flow problems are forcing budget cuts, and all the other bean counter excuses which fly around during budget meetings. Trust me. As a small business owner, I have learned to pinch a penny until old Abe Lincoln screams, but you just can't run your business without computers! And a broken computer is as good as no computer at all.

Old computers are absolute business liabilities! They're slow, buggy, cranky, and downright bitchy. They sap worker productivity to the point where you're basically throwing away their salaries. They consume more electricity than newer models. They require more time, attention, and hard-to-find (AKA expensive!) spare parts from your IT personnel. Old computers are costing you more money than you think!

Then there's the nightmare of a server failure. One client was out of business for a week because of a total failure of an old server. The downtime was caused by having to order a new server (made more expensive because we had to rush the shipping, which still took 3 business days), then we spent two days restoring the backups onto the new machine. Why? Because they refused to replace a 7 year old server even after I warned them it was heading towards a failure. I estimate that, because they didn't want to spend $10,000 for a new server when I asked them to originally, they ended up losing about $350,000 in lost productivity and business for the entire week they were down, and they still had to buy the new server. That's just a dumb business move.

Or the other client that refused to replace a 15 year old laser printer. The printer was so old it still used the old LPT port interface, which no modern computer even carries anymore. To make the antique printer work, they ordered an LPT to USB converter, which should have been fine, in theory. In reality, the converter blew out the motherboards on two separate computers because of some kind of bad power regulation. The converter manufacturer refused to accept responsibility, so everyone is waiting on the results of that lawsuit. However, my client lost two computers in one day which hurt their productivity, forced them to replace both computers, and they ended up buying a new USB laser printer. Because they didn't want to spend $200 on a new laser printer, they ended up spending $2,500 on new computers, plus whatever the lawyers will cost them.

Don't get caught in the same trap! Old machines need to be retired before they hurt your business. All it takes is planning ahead and smart budgetting. There are times to be prudent and cautious, but not at the expense of your operations! In the 21st Century, computers are integral business tools. Don't risk your business on old computers. It's really not worth it.