The Co-Evolution of Technology & Humanity 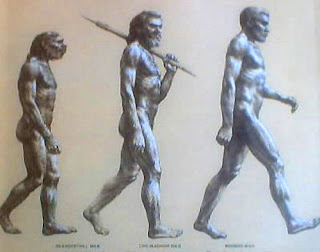 About 50,000 years ago, early humans invented the first languages. This innovation allowed us to communicate ideas and information across generations with precision. Language also gave us a mental framework for organizing ideas. By defining and verbalizing a problem, we are better able to innovate a solution.

Interestingly, what followed was an explosion in new technologies. Bows and arrows, throwing spears, nets, snares and a whole host of other tools helped us to further tame and control nature. By 10,000 years ago, humans and our new tools had hunted most of the megafauna into extinction. The earliest forms of agriculture started to change the flora of the planet. We changed our environment.

Evolution is nothing more than genetic adaptation over time to environmental conditions. Evolution is necessarily random, playing with the various components of our DNA until they develop useful adaptations. Useless adaptations die out while the useful ones are reinforced through successful breeding.

Logically, as humans have changed our environment, we have directly impacted our own evolution. And the way we effect the environment is through technology. There is an inescapable link between human evolution and the development of technology. Most interestingly, is that the rate of human mutation seems to have increased over the past 1000 years. We are evolving faster now that we were 50,000 years ago.
As our technology evolves, we evolve. This opens up a whole new range of possibilities. For example, is Twitter making us dumber or wittier? Is Facebook making us more social or more isolated? And how do these developments effect our DNA?

Suddenly your new tool, gadget, gizmo or idea could have far reaching consequences. This is not to say you shouldn't proceed. Anything that can be invented, will be invented -- it's just a matter of time and who gets the credit. However, there is a larger consequence that comes into play.

Be cautious as you forge ahead because your invention can be the next major turning point in human evolution. I don't know about you, but that is incredibly cool -- and frightening.