A Long View on US Debt 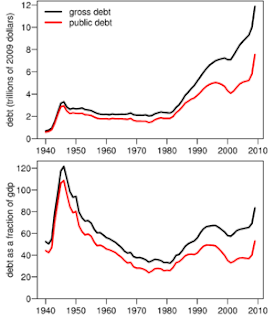 It's really a question of priorities. Right now is not the time to focus on debt reduction, especially when we are facing serious challenges to our future competitiveness in global markets. We need to spend money on infrastructure modernization and research and development to invent the next generation of technologies to secure our dominance for the next 25 years. You can't do that AND provide Social Security, Medicare, Defense and every other program without incurring debt.

Once the Baby Boomers die, Social Security and Medicare costs will drop dramatically. Then we can enjoy budget surpluses again. That's why I say the debt crisis is a short term problem -- it will solve itself in 20 years. And yes, 20 years is short term for a 200 year old nation.

I know the debt doesn't matter because it is a short-term problem. Pundits guess it will never be solved because RIGHT NOW no one is working on it. I submit they are worrying about the wrong problem right now.

Eventually the debt will reach a tipping point. Only we aren't anywhere near it. Remember, 60% of annual GDP is only a terrible debt problem if our GDP drops drastically (i.e. 10-15%) because then we will default on interest payments. Realistically, we can probably absorb debt up to 100-150% of annual GDP before it becomes a serious problem. I'm not recommending this under any circumstances!

Anyway, that's my position on the public debt. It's a problem but not as terrible as everyone wants to make it out to be. I encourage all learned and wise economists to argue or agree.