The Network Effect & the Electrical Grid

For several years I have been keeping up with the debates surrounding the Smart Grid. The short version is that the smart grid is a plan to add the power of digital internet technology into the electrical grid. The current electrical grid is essentially the exact same technology as developed by Tesla and Edison. There really hasn't been a significant advance in power distribution.

The current grid is all about centralization. Electricity is generated in central power generation facilities, either coal, gas or nuclear. This power is then transmitted over copper wires to homes and businesses everywhere. However, this is terribly inefficient. Up to 66% of the energy generated in a coal plant is lost as heat and another 8% is lost during transmission across the wires. Imagine running a business where you lose 74% of your inventory before it gets to customers! 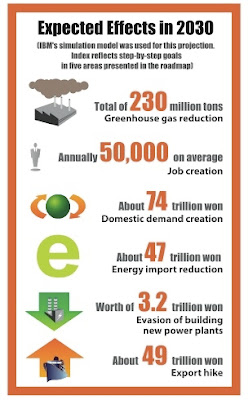 The smart grid is a plan to modernize our electrical infrastructure. The idea is to incorporate information technologies into the electrical grid to enable two-way communication of information. This will enable a whole new range of smart appliances that can be programmed to work during off-peak electrical hours. Imagine an air conditioner that knows to turn off during peak hours to save you money.

But it's much more than just that. The smart grid will also enable an entirely new generation of decentralized energy generation systems. By 2013 you will be able to buy your very own backyard nuclear reactor to generate electricity and feed it into the smart grid. If you generate more than you consume, then you will make money selling electricity! (For more smart grid benefits, see the graphic from an IBM report.)

The network effect when applied to the electrical grid will spark an innovation revolution. New technologies for power generation, management and conservation will spring up to serve previously unimagined markets, along with all the needed service and maintenance personnel. Also, consumers will be in a position to make choices about when and how they consume electricity by programming their smart appliances to run during off-peak hours, maybe even being able to select the actual sources of their electrical power.

And, as we have seen with the Internet, a decentralized, open system empowers entrepreneurs to innovate a new generation of technologies that will revolutionize how we work, live and play. It sounds like a win-win to me. Now we just need the commitment from government and business to make it a reality.