‎"No problem can be solved from the same consciousness that created it."
~Albert Einstein

We are in the midst of an enormous transformation which will define the global economy throughout the 21st Century. All change brings pain -- some more than others. 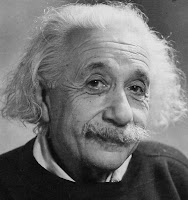 Just like the U.S.'s economic transformation in the 1980's from the Rust Belt to service oriented suburbs, the current transformation is hitting people hard. Persistent unemployment is simply a symptom of this problem. It's time to face the facts and accept that those jobs are gone forever. Just like the old Rust Belt factory jobs are gone forever.

And because we are embroiled in a mid-term election season, everyone is harping their favorite talking points in an attempt to curry votes. Yet, all I hear are the same tired mantras from all sides. No one is proposing new ideas that accept the economic realities of the age. No one is accepting the truth of the Network Economy.

We are still trying to solve the problems of the 21st Century with the ideas of the 19th. This isn't just stupid, it is potentially disastrous.

What we need right now are heroic innovators. Thinkers who are not simply interested in repeating party talking points but are genuinely interested in braving those first steps into the network economy. We need people who are not afraid to try (and fail!) to find the new answers we need.

Until we do, I fear we are in for more of the same economic grief.