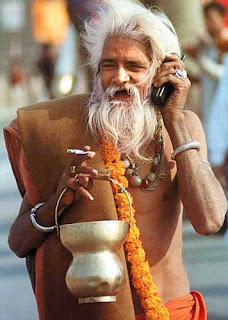 Well, not really. It's difficult to know exactly what percentage of the planet has cell phones because there are some countries with more than 100% cell phone penetration -- meaning some people have more than 1 cell phone. We do know that 1.5 billion cell phone users are in the developing world making cell phones the single most pervasive technology on earth.

Which makes sense, if you think about it. You can't be part of the Information Economy until you are connected into it. Cell phones are the perfect vehicle for that. They are cheap, small, light and portable. In developing countries a sizable portion of personal and family income is devoted to buying cell phones and usage minutes.

The point is clear - the future of information technology development is the phone. Soon the majority of web users will connect via cell phones. As time passes, more and more functions will be squeezed into the humble cell phone. From the original brick phones from 1982, we have now replaced cameras, music players, sound recorders, watch, alarm clock, television, newspapers and even computers with modern smartphones.

If your business relies on the Information Economy then you need to prepare for the cell phone future. More than just adjusting your website for easy viewing on a smartphone, it means a shift to portable information/communication technology platforms to enable your business. Forget just getting email on your phone, the future will allow you to run your entire business from your phone.

But only if you are ready for it. Are you ready for tomorrow?