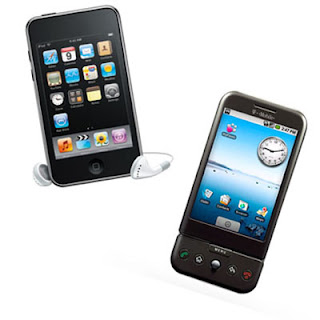 iPhone or Android? Open or closed? Which do you prefer?

Don't worry, I have no intention of rehashing this tired argument. Frankly, I could care less which smartphone you prefer. This post is really about the battle between open and closed platforms.

The iPhone is the perfect poster child for a closed system. Everything about it is rigidly controlled, down  to the apps you can install on it. Apple says that this is to ensure peak performance on the device. That's why Steve Jobs banished Adobe Flash into the wilderness and there is no chance for a Supreme Court appeal. Every aspect of the iPhone is controlled. Owners can't even change their own battery!

Android on the other hand is completely open. Anyone can download it and develop a product running Android. Anyone can download the Software Developers Kit and release a fully functional Android app with no review committee passing judgement on it's technical purity. Sure, some apps will suck and will cause the phone to crash, but who cares? At least I can change the battery myself.

In the platform battle that has waged since the dawn of technology, human beings prefer open systems. Ultimately open platforms have a much greater upside. In a network economy, more and more users will flow into open platforms because they offer the greatest degree of flexibility and choice.

Forget all the hype about how the iPhone has so many millions of more apps. Apple has a 5 year head start on application development over Android. Very soon, the Android apps will vastly outnumber the iPhone apps simply because there's no Android App Bouncer deciding who gets into the party.  Sure that means there will be more crappy apps on Android but it doesn't matter because there will also be many more to choose from. Ferocious competition always breeds quality.

If you want flexibility and the greatest number of options down the road, then pick the open platform. If you prize stability and reliability over everything else, then pick the closed system. That's really what the whole dogfight comes down to.

And for the record, I prefer open platforms. BHF is the Mac geek.