You Don't Mess With BHF

Many of my IT War Stories feature the same cast of characters. I figured you should get a brief introduction to each of them, so you'll know who I'm talking about. 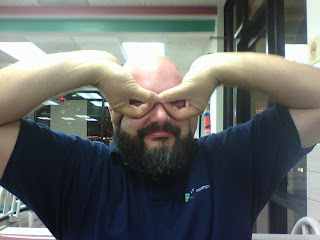 First and foremost, BHF, is my hetero lifemate. Kind of my Silent Bob. BHF stands for Bald Headed Freak and he is a certified genius. Sadly he hates the term because he has met too many other so-called "geniuses" who are too dumb to staple paper. Therefore, we avoid using the term around him. Don't tell him I told you.

BHF is absolutely brilliant. He is the brains behind the R-Squared Computing operation and I am proud to say it. He is one of those annoying people that does everything well and seemingly without effort. He'll decide on Wednesday that he wants to teach himself to tie knots and by Thursday he's teaching you how to tie a monkey fist. Annoying as hell.

I like throwing him curve balls to test his intellect. I like flexing my Evil Genius nature by commissioning him to develop all kinds of strange doomsday devices and weapons, like gloves that shoot lightning bolts across the room. Usually those requests are enough to make him curse me for hours.

It's like I hit him in the head with a Crazy Idea. He'll patiently explain to me all the reasons why my ideas are ridiculous. Why the Tesla Coils or Van de Graaff Generators needed for the glove would be enormous. He growls when I suggest that he find a way to miniturize them. Of course, once he's done telling me all the ways I am wrong, I question his intellect. I might even call him a pansy too.

BHF is easily the technically smartest person I have ever met. I have handed him challenges that would make lesser men come after me with a machete. In every case he has suceeded brilliantly and achieved better results than anyone could reasonable expect.

Incidentally, the other major thing you need to know about BHF is that he is absolutely Evil!

Don't get me wrong. He's a sweetheart. He's kind, generous to a fault and dedicated to his family. But if you annoy him, be careful. BHF is the kind of guy who will tell you that in 1 year he will come back and smack you for your idiocy. Exactly to the minute, 1 year later, he'll be there to smack you. He has zero tolerance for bullshit and stupidity.

Everyone that knows him for more than a few months will agree that he is evil to the core. Never malicious or cruel. Just evil. Forget Zohan, don't mess with the BHF.
By Unknown