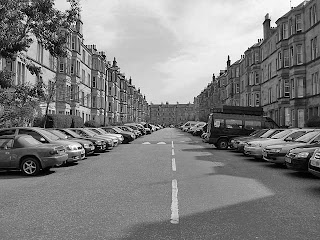 Last week I fielded a series of emails and phone calls from a former client that wanted to hire us back. This was a client from back when we first started R-Squared Computing 10 years ago. We parted on less than friendly terms for a variety of reasons which I won't bore you with.

Like a psycho ex-girlfriend they are asking for a second chance. They assure me that they are under new management and that the troubles we had before will not happen again.

Then he drops the hammer -- he wants us back at our 2004 rates! I explain that we have grown considerably and that our rates are more than double what he is offering. He argues that he can't pay more than 46% of our current hourly rate because of budgetary concerns.

I tell him that I will have to take it up with BHF because I don't want to accept such a low rate without his approval. After speaking with BHF we agree that we don't want to take a step backwards with our business (especially when we don't have to!) so we turn down the offer. I explain our reasoning in an email and I even recommended a friend who would be happy to accept the offered rate.

Not 2 minutes later, he calls me to say that he is upset with the email - that because of me he has "egg on his face" since he's been telling everyone that we had agreed to the lower rate. How he got that impression is beyond me. He asked me to reconsider and then bumped up the offer to 53% of our current hourly rate.

Now, I should have thanked him politely and said no. But I hate to turn down any business. So I agreed to speak with BHF, again.

You see, I had an idea: we could accept them at the lower rate with the understanding that they would become a Tier 2 client. We could try out new hires at their location and review their performance before giving them access to our more important customers. They got the rate they wanted and we got a place to test out new employees.

All in all, I thought the contract was fair and balanced. They got our expertise and core knowledge of their systems (which we designed and installed in the first place) and they got the rate they wanted. The perfect example of a win-win scenario.

So here's my advice -- sometimes it's best to find the middle ground.  I don't negotiate my rates. The moment a prospect starts arguing price then they don't understand or respect your value proposition. If they don't recognize the value of your services then it doesn't matter what you charge them, they will never be completely satisfied.

However, if you can negotiate to the middle ground where everyone benefits, then you win.  Don't ever lower your price without getting something valuable in return. Because of the new contract with the old client I have a place I can test and train new hires; and they get us back.

Have you ever agreed to drop your rates? What did you get in return?

If you liked this article, email it to a friend!
Make sure you never miss another article from The R-Squared Method. Sign up for email or RSS feeds at http://www.lourg.com/subscribe.shtml.
By Unknown