Polls Sch-molls - My Frustration With 2012 Politics 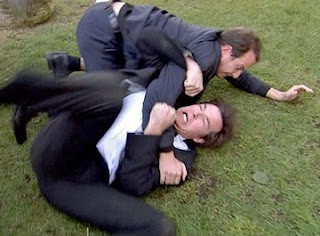 Where to begin? I promise to keep it brief and non-partisan.

American politicians are confused about the difference between job creation and wealth creation. This means they're both wrong about the role of government in the economy. Both President Obama and Governor Romney are guilty.

Jobs and wealth are not the same, not by a long shot.


Last time I checked, federal, state and local government are the largest employer in the USA. Cops, firefighters, soldiers, teachers, DMV workers, court clerks, elected officials and bureaucrats of all stripe are all government jobs.


Another pervasive element of this economic fiction is that money "confiscated by the government" (AKA taxes) falls into some deep, dark pit from which it never escapes. Only, the majority of total state and local government expenditures are payroll! That money is then spent on housing, clothes, food, education, cars, fuel and everything else that makes the economy run. By any definition, that's a job -- and it was created by government.

Adam Smith, author of The Wealth of Nations, defined wealth as "the annual produce of the land and labour of the society." Because iPhones sold well, the annual produce of our society increased and more wealth was created. The stock market simply acts as a convenient way to measure wealth and convert it into cash.

Consider the iPhone as a great example. Without government investment in electrical and Internet infrastructure, the iPhone could not exist. Plus it gets to the store via railroads and highways. History is clear -- every penny we spend improving America makes us all wealthier.

And I promised to keep it short...

Anyway, that's my current problem with the Presidential race. How can either one improve the economy if they don't understand the difference between jobs and wealth?