I like to keep an eye on the global economy. Not because I don't have anything better to do -- it's because in a network economy all points effect all others. The old beliefs in a "national economy" are nothing more than nostalgic fiction today.

A few months ago, I warned that the world will soon be facing a Chinese version of the Western financial crisis. As more news keeps filtering through the Great Fire Wall, it only confirms my fears.

Back in October 2011, the New York Times reported about how Chinese small business owners have had to borrow money from loan sharks. Because they are unable to borrow money from the large state-controlled banks, they turned to loan sharks for needed capital. With the current economic slow down, many business owners are unable to pay the loan sharks. In order to avoid getting their legs broken (or the Chinese loan shark equivalent), most are simply just vanishing. As the small business foundation in China crumbles, it is only a matter of time till the big businesses begin to collapse.

Today I read an article in The Economist which puts another nail in the coffin - in February, China's trade deficit hit an all time high of $31.5 billion! While they always run a small trade deficit when everything shuts down for Chinese New Year, it has never been so pronounced.

China's economy is linked directly to export. With the economic troubles in the West, Chinese exports have taken a serious hit. However, while we are beginning to see signs of economic life as we adjust to austerity, the Chinese are in no way prepared for austerity measures.

How will a Chinese collapse impact the United States? Europe? All of China's trading partners should be very nervous. The network economy has increased interdependence. 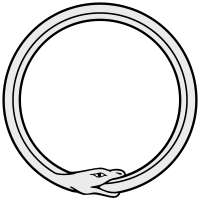 Like the ancient Ouroboros symbol, the world economy is a snake eating it's own tail. We are, literally, all in the same boat. China's pain is a direct result of the Great Recession and the current EuroZone mess. The real question -- how will this further hurt the global economy?

The entire Chinese Miracle of the last two decades is entirely dependent on growth. What happens when growth stops? We will keep seeing the cracks in the Chinese economy grow wider. If you do business in China, be prepared. The news will not get better.