We Need An Energy Manhattan Project 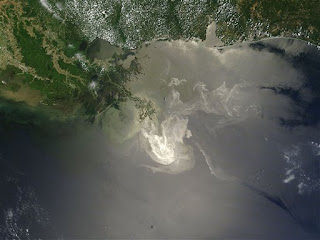 As a native Floridian I am concerned about the BP oil spill in the Gulf of Mexico. I admit my concerns are mostly selfish since my favorite beach vacation spot is on that coast but I am also aware of the enormous  costs of this environmental disaster.

Moreso it has gotten me thinking about the problem of energy. For over 100 years we have relied on oil as a source of fuel. President George W. Bush stated America is addicted to oil and just a few nights ago, President Obama upped the ante by declaring we are addicted to all fossil fuels. We have been mining sequestrated carbon (coal, oil & natural gas) and burning it to produce cheap energy for centuries.

But the costs of that energy are steadily rising. Not just the price per barrel of oil, but also the environmental costs that are difficult to measure. No matter where you stand on the issue of global climate change, it is undeniable that we cannot continue to pollute our biosphere without drastic repercussions.

Several years ago, I postulated that America had managed to achieve greatness by undertaking generational projects of epic scope. Somewhere along the line, we lost the political will to continue with these projects and it has made us weaker.

There are numerous examples of this country engaging its capital and intellect to develop solutions to pressing problems. The Erie Canal project (1817-1825) was our first major stab at westward expansion. By linking New York and the Great Lakes, the Erie Canal led to an explosion of commerce and trade. It gave the interior of the United States access to eastern seaports and international trade routes.

Between 1863 and 1869, the United States completed the first transcontinental railroad. A massive achievement that opened up the West and connected both sides of our young nation. It was a monumental achievement completed by a people who believed we could accomplish anything with grit, vigor and plenty of cheap Chinese labor.

Let's skip ahead past the wiring of America for telegraph, telephone and electricity. From 1942-1946, the United States dedicated itself to the Manhattan Project. This historic team of 130,000 of the brightest technical and scientific minds under the brilliant J. Robert Oppenheimer conceived and built the first atomic bombs. For the modern price tag of about $22 billion, the United States leapt ahead of the rest of the world and established itself as the dominant military power.

Then again on May 25, 1961, President Kennedy challenged America to land a man on the moon before the end of the decade. This led to the Apollo Program which on July 20, 1969 successfully let Neil Armstrong leave the first human footprints on our nearest celestial neighbor.

And since then -- nothing. Politicians have tried to score points by declaring wars on cancer, drugs and homelessness but have done next to nothing to eliminate these problems. We need to stop declaring these feel-good, ideological wars and focus on solving real problems. Fortunately, BP has catastrophically illustrated the largest of those concerns.

I call on our elected representatives to stop paying lip service to problems and to have the foresight to properly fund a new Manhattan / Apollo project to finally solve the energy crisis. Deficits be damned. This is something that will easily repay itself from all the money we will stop spending on imported oil.


America is at it's best when we are confronting challenges. We are at our best when we are all reaching for a common goal. Our so-called leaders in Washington have failed us for far too long (I don't care which party you worship, they are equally culpable!).

It is past time that we embark on a generational project to solve the energy crisis. It is within our grasp to develop clean, renewable, cheap and plentiful energy -- if only we dare reach for it. It is time to end the energy status quo and to abandon the 1000 year old practice of burning fossil fuels. Now we just need to political will to demand it from our elected officials.