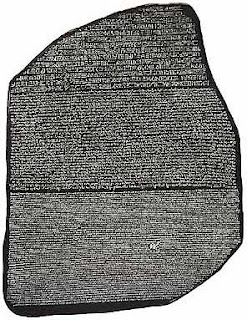 The Sumerians of ancient  are credited for inventing the earliest form of writing around 3,500 BCE.  The oldest surviving records from Sumeria are accounting records kept by merchants and the government. Using clay tablets, they recorded wisdom and knowledge. What started as just a record-keeping tool for ancient accountants was adapted to produce some of the greatest literary works in history.
Writing is simply the a representation of a spoken language using symbols. These symbols started out as elementary pictographs - so the word "sheep" might be a simple picture of a sheep, and so on. The problem with this system was every new idea required a new symbol. Eventually phonetic alphabets, so named for their reputed inventors, the ancient Phoenicians, were invented.
Because the Phoenicians were mostly merchant seafarers who traveled to foreign lands (with foreign languages) they developed a symbolic alphabet which represented sounds instead of ideas. This was a substantial leap forward because their language could grow without the need to add more and more pictographs.
The invention of writing was the birth of the information revolution. This revolutionary ancient technology allowed ideas to spread without loss. For the first time in history, an author could record and share his or her ideas with others.
Before writing, ideas were spread only by word of mouth. Anyone that’s ever played the party game Telephone knows how easily verbal information can change. And just as surely this amazing invention changed humanity forever.
First and foremost, it established literacy as a nominal requirement for membership into the exclusive club of the intelligentsia. Everybody who was anybody could read and write. Everyone else was locked out. Writing allowed the flawless transmission of memories and ideas -- but only if you were educated.
Writing also created the need for the first formal education systems. Rich people wanted their kids to have every advantage so they paid educators to tutor their children. Early students studied the Three R's (readin', 'riting, and 'rithmatic) which gave them the tools to further their future careers.
Writing also extended political power. Suddenly kings could issue decrees and edicts from the comfort of their palaces. Government accountants could tally and track taxes with greater accuracy. Court historians could keep the chronicles of the age. All because people figured out to connect written squiggles with spoken words.
And that is why, more than 5000 years later, we can still read The Epic of Gilgamesh. Because someone got the bright idea to keep records of fig imports at the docks of ancient Sumeria, writing has revolutionized the world. Writing allows our ideas to transcend time and space, so write well. You never know how long it will last.