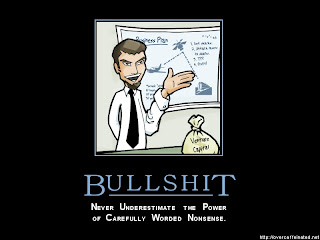 I remember being dragged to a college party where I was surrounded by pretentious assholes. One particular fellow from Harvard was making a complete ass of himself. He was holding court in a loud, nasal voice and preaching on the wisdom of each person's major. I disliked the Harvard Mouth immediately.

When he finally deigned to ask me my major, I couldn't resist having some fun at his expense. I told him I was studying "todology."

FYI, I invented this out of whole cloth. I just combined the Spanish word "todo" meaning everything with the suffix "-ology", for the study of. In his arrogance, the Harvard Mouth could not admit to his ignorance so he nodded sagely and tried to move on to the next person. Of course, I didn't let him.

I took command of the conversation, pontificating on the virtues of the Todological Sciences and the incredible strides in the field accomplished by Dr Freddy, my mentor in the field. I argued that todology would soon replace many university departments including economics, international relations, political science, business, philosophy and even religion since it offered a superior explanation of reality.

The Harvard Mouth was completely at a loss. The more I talked, the more he nodded. He had jumped into the deep end of the swimming pool and I kept pouring more water on him. If he called my bluff now he would look like an idiot for not challenging me sooner. This only encouraged me to keep making up wilder claims about todology.

Around the time when I declared that todology was weeks away from a cure cancer and the solution to world peace, my date finally realized what I was doing. Embarrassed, she grabbed my arm and started making her goodbyes. Apparently she didn't like being seen in public with such a brilliant todologist.

So the next time you find yourself surrounded by blowhards, just remember the Todological Sciences and don't be afraid to include it in your conversation. Dr. Freddy doesn't mind if you attribute invented books to support your arguments.