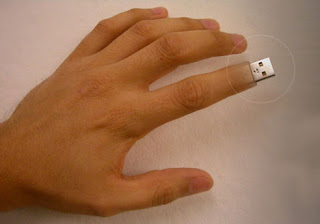 For many years science has known that humans are able to conduct electricity. Anyone that has ever touched a live wire or seen those experiments to light up LEDs using human current are personally familiar with the phenomena.

Researchers have recently found a way to transmit data along a human arm. They hit transmission speeds of 10 megabits per second which is comparable to early wireless network speeds. They argue that this discovery will eventually make Bluetooth obsolete.

Imagine using the human body to transmit simple signals along your personal Human Area Network. Imagine a future where your clothes and your devices sync and share information using your body as the medium. Add in ubiquitous computing, the national wireless cloud and suddenly you have a collection of game changing technology platforms.

Like I have said before, we are on the verge of changes that will make the last 30 years look silly by comparison. We are on the verge of the network economy and everything will be effected by it. Don't  get caught in the cold. Don't make the mistake the newspapers made 15 years ago and ignore the tech reality.

The choices and steps you take now will determine your success when these disruptive technologies become commonplace.

Are you ready for tomorrow?