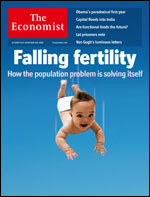 This week's cover story in The Economist is about the global decline in birth rates in industrialized nations. I recommend you pick up a copy for yourself and read the entire article.

I want to discuss an angle that was not covered however.

The entire history of economic development since the birth of the Industrial Revolution is based on growing populations. More people means more consumers means more profits.

Wall Street must be fed a steady stream of profits or stocks decline. When stocks decline, the economy as a whole suffers -- leading to tightening of credit. Just like we have been suffering for the past year and a half, tight credit means there is less money in motion and everyone suffers.

Within 35 years, the dropping birth rates will start to effect business.  That means either:


I briefly considered including a #3 - Permanent recession, but that is too depressing to imagine. I refuse to believe human ingenuity won't find an alternative.

That means we have about 25 years to figure out what that "new normal" or new economy should look like. That will then give us 10 years to work out all the kinks and corrections. If we don't then today's First World nations will become irrelevant in the 21st Century.

The entrepreneurs that figure it out will dominate the business world in 30 years.

How do we reverse a 200 year economic reality? What will the lower population economy look like?