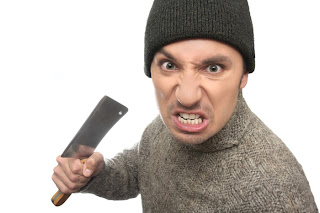 BHF and I had our first meeting with Excalibur on the inauspicious date of September 11, 2001. During that preliminary meeting, the company owner told us horror stories about his computer tech, Madman Ron. He would quit every two weeks, would shout at workers and was generally foul and evil. The owner felt that his company was held hostage by an insane computer guy. By the time we left, I was convinced that Ron was a lesser spawn of Satan.

To make matters even more urgent, Excalibur was about to receive an enormous order via EDI. Without Ron, they had no way to process the EDI order and could stand to lose millions of dollars. Of course we agreed to take on that challenge!

Bright and early the following morning, BHF and I arrived. Imagine our horror when we discovered that the entire company was running on a 1988 version of dBase! Talk about ancient! By 10AM, BHF was cursing my existence and plotting my death.

Then something amazing happened. Madman Ron walks into the IT office and stops cold. "Who are you two?" he asked.

I make the introductions mentally preparing for all out war.

"I see," said Ron. "Looks like he finally called my bluff. Have we received the EDI transmission yet?"

To make a long story short, Madman Ron was actually one hell of a great guy. The real problem was that he was completely overwhelmed. He was managing the entire information technology infrastructure for a 125 employee multinational company all alone! All of his fits and quits were a cry for help.

Ron was routinely working 16 hour days. He would stay till midnight correcting mistakes in the data. He was responsible for repairing computers and printers, training employees, data security, EDI, data integrity, error correction and way too many other things for 1 human being.

That same day, Excalibur hired Ron back and we stayed on to assist him. The EDI order was processed. Within 2 weeks we had that company humming and running smoothly.

The moral of the story: Sometimes demons are really angels with too much stress.