Lou Versus The Borg 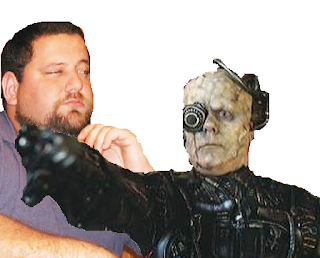 A long time ago at a software company that doesn't exist anymore...

One afternoon, as a representative of the Sales Department, I was consulting with BHF, a friend in the Quality Assurance department. After we took care of business, we caught up on each other's gossip.

I told him about the latest outrages and perversions from Sales. And he told me about The Borg.

Apparently, Quality Assurance had hired someone new. The new guy had a habit of walking around the cubicle farm every 15-20 minutes. Sometimes he would go to the bathroom, come back, walk twice around the cubicle farm, then sit down and work for 15 more minutes. When he went to lunch, he'd come back, walk around twice and get back to work. This went on all day, every day.

The folks in Quality Assurance nicknamed him The Borg.

I was convinced BHF was full of crap. I just knew this was some sort of practical joke, when suddenly there were two knocks on the cubicle wall.

I leaned out of his cubicle and sure enough, coming around the corner was this tall, skinny, lanky guy. Eyes focused on the ground 3 feet in front of him, hands crossed in front of his waist, he walked towards me.

"Does he talk to anyone?" I asked.

Of course. The Borg had fixated on the hot Asian chick.

After The Borg passed, BHF and I evacuated into Susan's office. She confirmed everything and also added that The Borg had started talking to her. He would mutter inaudibly at her for several minutes every day. He recently started following her in the parking lot.

As BHF and I exchanged a worried look, in walks The Borg!

He locked eyes with me for a split second, turned a very hurt look to Susan and walked out.

BHF said, "We have to do something."

I couldn't agree more. We decided to lay a trap.

Now, you need to know that BHF is one of those people that is always making something with his hands. He works with whatever materials are close at hand. The project he was working on during this episode was a Celtic cross made completely from Cat5 wire strands. It's impossible to describe but it was beautiful.

BHF and I retired from Susan's office back to his cubicle. BHF waved in Rudy the Pay-Per-View Sifu. It's always good to have backup and Rudy was a real Kung Fu Master.

"Rudy, The Borg is messing with Susan. We're going to try to get him to hit Lou so he'll get fired. You in?"

Of course Rudy was in. "Dumb of you to ask," said the Pay-Per-View Sifu.

Just then, a full 10 minutes ahead of schedule, The Borg begins his walk around the cubicles. Rudy rushes back to his seat and pretends to work. Looking around for inspiration, I grabbed BHF's wire cross.

"I always wondered why an atheist made a cross," I said. "Now I know it's to fight evil!"

Once again, I leaned out to watch The Borg approach. He still kept his eyes on the ground, walking his steady pace. Just as he was in front of Rudy's cubicle, I leapt in his path holding the cross in front of me.

Not saying a word, The Borg looked at me, looked at the cross and turned to walk the other direction!

"He's passed his desk, he's coming back around!" shouted Rudy in his excitement.

I turned 180 degrees and extended the cross. The Borg stopped. Looked at me, looked at the cross and turned again!

On and on it went. Me and the wire cross forcing The Borg to turn around and walk the other way. I started herding him in, forcing him to walk shorter and shorter routes. Eventually, BHF and Rudy started helping. BHF and I hemming him in tighter and tighter with Rudy running the wire cross relay.

Everyone in QA was standing on their chairs cheering us on. We were drawing a crowd from adjacent departments. It was like some ridiculous tennis match invented by Van Helsing to trap vampires. BHF and I playing Borg Pong trying to trap him at his cubicle.

We almost got him too, expect Ruprect, the Quality Assurance manager broke up the fun.

Sadly, The Borg was fired the following day.
By Unknown